After the successful launch of KTM Duke 200 in India which was well received biking enthusiast, now the wait is over, Bajaj KTM has finally launched much awaited KTM Duke 390 in Indian market and yes with an amazing price of Rs. 1.8 lacs (ex-showroom) only.

Definitely it is going to be a pleasant surprise for those who were looking over this launch to upgrade their bike to a powerful engine and with such price tag, it is going to be a boon for riding enthusiast. The bike was in news from quite a while and with such an affordable price for a beast like KTM Duke 390, it is definitely going to have new and even more admirer those who were otherwise reluctant for expected high price tag . But Bajaj has defied all expectations and bike is in market for you with incredible power and price tag. 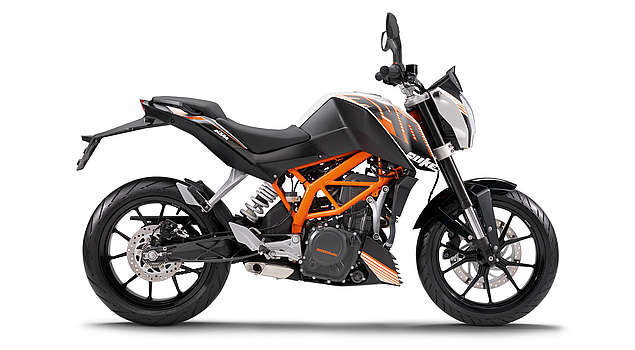 The Big one ie. Duke 390 boasts very nice specs on paper and is been one of the highly anticipated bike on Indian shores. The KTM Duke 390 shares a lot from Duke 200 however you can see more colors and visual mass on Duke 390. But on engine upfront, the bike is completely different from KTM Duke 200. Overall its completely new bike with its own identity.

This is all naked bike with beefy engine exposed through the its steel frame where almost all of the unused metal has been shaved off to keep bike light, the bike weighed around 390 kg which adds even more punch to its sporty DNA. With similar muscular presence which we saw in its younger sibling , it has futuristic headlight and nice color combination.

Coming to its technical details, the bike boasts 373.2cc 4 stroke single cylinder liquid cooled engine which comes with 4 valve per cylinder. In terms of power, it produces 44bhp at 9500rpm and has torque of 3.57kgm at 7250rpm. Comes with 6 speed transmission with 1 down and 5 up and has 172mm ground clearance. The bike has very impressive braking power with front four piston, radial caliper 300mm disc and at rear it has single piston 230mm disc and has a Bosch 9MB two channel anti-lock system. It has cast alloys wheels measuring 3.00 x 17- 4.00 x 17inches and tyres meassuring 110/70 x 17-150/60 x 17inches.

Below we have quick overview of Bajaj KTM Duke 390 bike:

Other than that, you have options for extra accessories like:

This bike will now give serious competition to other 200+ cc bike like Honda CBR150R and CBR250R, Hyosung GT250R, Kawaski Ninja 300 and few others. With launch of this bike we may see a price war coming in higher capacity bikes however, it is not sure if Bajaj is going to maintain introductory price or may see a rise in price in future. The bike is now available in 60 cities across 71 KTM dealerships. Bookings will start on tomorrow, 26th of June.