Counted among the top leading car manufacturer in the country,”Tata Motors” has launched the Explorer Edition of Safari Storme in the Indian auto market with a host of new features. Dubbed as Tata Safari Explorer Edition , the special edition model has today been officially launched in the country at a starting price of Rs 10.86 lakh (ex-showroom, New Delhi). The Special Ediiton model was presented by Bollywood actor Anil Kapoor. 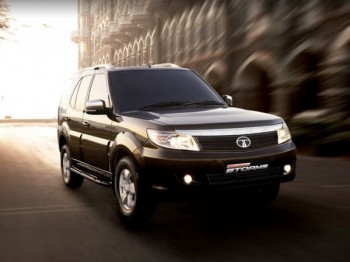 Just when Safari fans were starting to settle down with the advent of the Storme, Tata Motors decided to get just a little bit more adventurous with their SUV. Coming towards the technical details and specifications of Tata Safari Storme Explorer , in terms of power this machine is equipped with 2.2Litre VariCOR 16 valve DOHC VTT 33 bit engine, which produces 140 PS of max power and 320 Nm of peak torque. In terms of fuel efficiency, the company official claims that it will chunk out around 14kmpl which definitely lure it’ fans. This machine can touch a high speed from 0 to 100 km/hr mark under 15 seconds.

The Special Edition model also features ESOF (electronic shift on the fly) technology, enabling engagement of the 4×4 or 4X2 mode, on the move. On the outside, the Safari Storme gets an additional nudge guard, chrome garnish on the headlamps and tail lamps, door visors, Explorer badging all around and Explorer compass decal on the hood. Other optional accessories include cycle carrier, cargo basket and roof-mounted canopy. On the inside, the Safari Storme Explorer Edition comes with leather seat covers and additional features such as 2-DIN touch screen infotainment system with Bluetooth connectivity and provision for reverse parking camera. There is an additional Garmin navigation device too.

The competition of the Tata Safari Storme, which includes Mahindra XUV500, Mahindra Scorpio and so on, is way ahead in terms of volumes. The overpriced positioning of the Safari is the reason for its poor demand.

For more information on latest automobiles, stay tuned with us.