Bike modification and customization is a big business now, we see lots of crazy customization, new concept, design and experiments , there are plenty of them. Today we are going to discuss about once such crazy modification of Royal Enfield bike by Piet Smit. 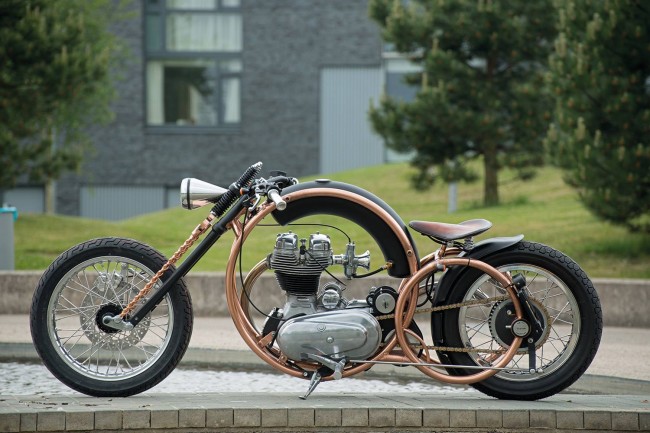 This bike is not new and have been floating around internet for quite a while. This bike came in news when it was participant in the 21st Bike Show Competition located in Rosmalen, in the Southern part of The Netherlands, organized by leading European custom bike magazine Bigtwin, saw over 100 participants coming from all over the continent. There this bike finished at fifth place. Other than that, there were numerous good creation however, because this one is based of Royal Enfield, this is our bike interest today. 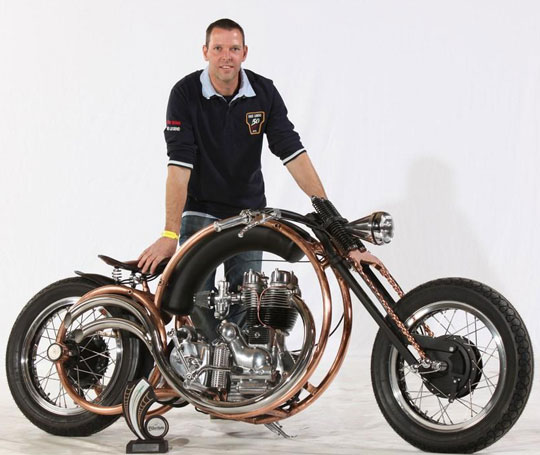 If you look at bike closely, apart of the stock Royal Enfield CI engine, you will not find anything else from the donor bike as its completely customized from front suspension, bike frame , wheels and everything. Essentially its all naked bike with those swooping lines as the main highlights of the bike. Look at twin exhaust silencer, perfectly crafted to flow with body lines. And because of those circular frame , the creator has named it as “Olympic“.

Very strong attention has been given to every small details, including those tiny side turn signal light just beneath the rider seat. Further if you see the fuel tank, how easily it is blending with overall bike.

One thing I noticed that earlier this bike had drum breaks in front wheel, but later creator went for disk brake, which gives even more sophisticated presence to the bike.

Do leave your comments and feedback, and if you want to publish story about your bike, let us know.