Indian automaker are on the course to take the standard of automobiles in India at International level. Royal Enfield, one of the most iconic, retro and powerful two wheeler automobile manufacturer in India is all set to launch it’s much debated machine “The Continental GT – Cafe Racer” in UK this September. However, there was news for it’s launch in India first but company officials decided to make it’s grand launch international .

The Royal Enfield Continental GT has been an eye candy since the 2012 Auto Expo, when the bike maker unveiled the Café Racer motorcycle to the Indian public. After the uplifting of covers, it has been one of the most talked about motorcycle recently in the Royal Enfield enthusiasts, which is finally being launched next month starting from the UK market. As per the information available by the company officials, launch of Royal Enfield Continental GT is expected to happen somewhere around the festive season. Royal Enfield is a part of Eicher Motors Group and is considering being a global player by introducing the upcoming offering in the mid-sized motorcycle segment.

Royal Enfield, is known for it’s creatively and cleverly designed cool retro machines. Coming towards the portfolio of the company, it has designed some of the most ultra-sylish and innovative machines including Bullet, Classic and Thunderbird in both 350 and 500 cc displacements. It also exports motorcycles to 40 countries globally including the USA, UK, Japan, other European nations and Latin American countries, as well as the Middle East and South Asia.

The Royal Enfield Continental GT is a global product powered with a 535cc engine that is expected to produce 30-35 BHP with a top speed of 160 km/hr. This new machine is manufactured with a stylish Café Racer design, which mainly focus on the speed and handling rather then comfort and look. The outstretched fuel tank along with low slung handle bars and twisted back seat are the typical elements of a Café Racer motorcycle, which gives this Royal Enfield a unique look. 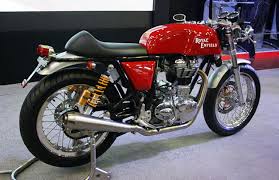 Mr. Lal also said that Royal Enfield has been working to expand its distribution network both domestically as well as on a global scale and become the market-leader in the mid-sized motorcycle segment. Since the commencement of it’s new plant at Oragadam, near Chennai earlier this year, the company has been gradually bumping up production in order to reduce waiting period for its motorcycles.

With all these premium features we can expect a high price tag of Rs. 2 lakhs. Company also stated that, “Royal Enfield is also on a verge to increase their total production capacity by over 40 percent next year to 2.5 lakh units from the current 1.76 lakh units”.

The bike is adequately powerful which can make the rider fly high but with it’s overall look and retro design, will it be appreciated by Indian buyers at this hefty price tag ?
Please share your view with us.

For more details on automobiles, stay tuned with us.