On one fine Sunday, weRR decided to go give visit to some of the lesser known place near Murena district known as “Nareshwar Temple”. Though Nareshwar is actually name of the village near which these temples are situated. If we dig further then they are known as “Norar” now a days as per MP Tourism website but there is almost non-existing information available about them. 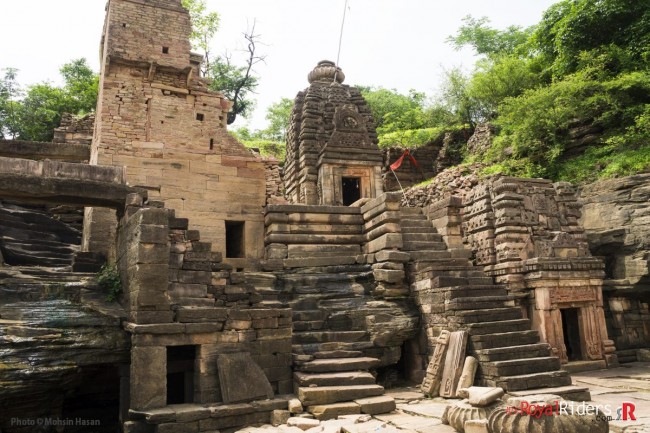 An hyperphysical view of Nareshwar Temple.
Photo by : Mohsin Hasan

Apparently it was known as “Jaleshwar” in past which makes sense as Jal (जल) is hindi word means water and other parts means God. As per limited information available online, these temples belongs to Pratihara Empire, which was an imperial dynasty that ruled much of Northern India from the mid-7th to the 11th century. We have been to similar style Mitawali-Padawali and Bateshwar Temples in past.

The art of the temples of the Pratihara period in central India serves as a transition between the post-Gupta art and the medieval dynastic art of the major part of northern and central India. It has preserved to an appreciable extent the qualities of the post-Gupta art mingled with its own distinguished contribution and, on its decline, passed on a sound and well-established architectural tradition to the succeeding medieval dynasties in the region, such as the Chandellas of jejakabhukti, the Kachchhapaghatas of Gwalior, the Paramaras of Malwa and the Kalachuris of Tripuri jabalpur) being the major ones.

The temples of Naresar falls to the early period Pratihara Dynasty with their simple plan, adhishthana, janghas and decorative scheme are reminiscent of the Gupta art.

These temples are not far away from National Highway however, generally people visit them from southern part where the Mawai DAM is situated but we decided to take other route since we were coming from Agra which goes through Nareshwar Village. Once village ends there is hardly any marked pathway. Luckly we were able to spot subtle path used by villagers scarcely who visits this area for its natural pasture to feed their livestock and water stream as we noticed some people bathing in small streams coming from hillocks. 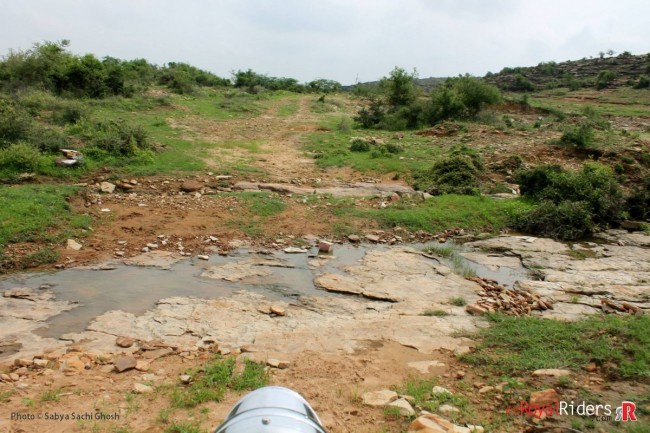 We saw several such streams in our way to Temples.
Photo by Sabya Sachi Ghosh. 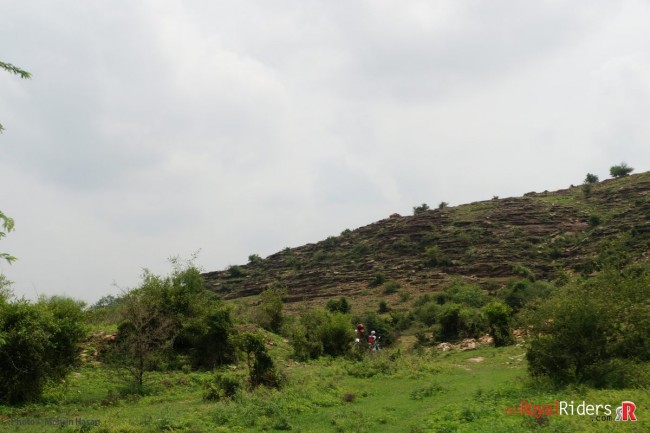 Almost lost in vast greenery and rocks at Murena . You can see some of the Riders at distance.

The navigator of this Ride was Saby, but at various points it was not clear to anyone whether we are on correct path or not, may be because of recent rains, it was plush greenery all around covering almost everything. At few places we actually stopped to reassess whether we should move forward or take some help (ofcourse which was only available back in village). But Saby was certain and finally maneuvering through rocks, mud, water we saw a water body but temple was still not visible. Apparently that was Mawai reservoir and we finally stopped at large open green landscape where some animals from village were grazing, we stopped there and decided to look around to ascertain our path, it was big open green area and everyone scattered to see if they can get any clue and finally on our right Mohsin (thats me) spotted some structure in hillock and that was our destination. 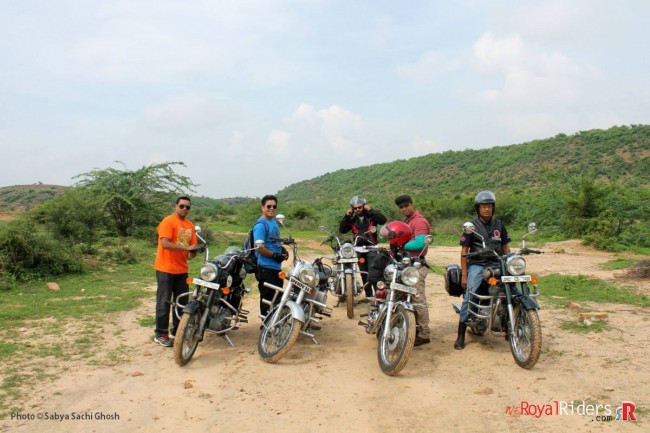 A pitstop to assess if we are on right track 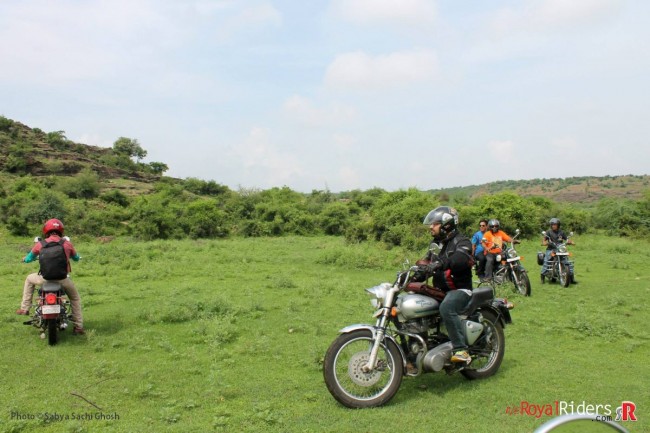 Large green open area near Naresar Temple where thought we are lost. 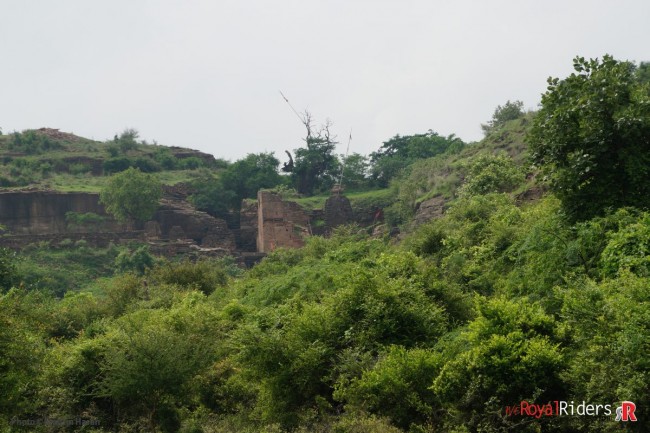 The first glimpse of Naresar Temples finally ending all uncertainty.

Hence we started moving in the direction of the structure we spotted and through large bushes we were welcome by path full of small boulders and everyone was praying that their rubber won’t get hit by some edgy stone in this desolate terrain and halting the ride. But luckily it was not that long we were already there. Not every one reached till end of pathway, few decided park their rides earlier. 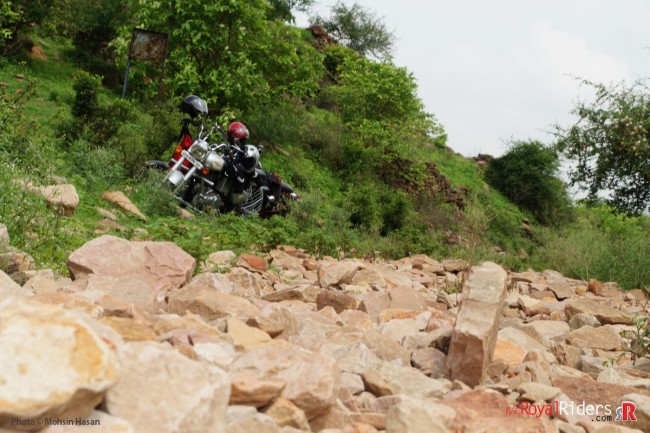 At the end, we were riding over these rocks.

When we reached the temple, we saw a big gate but on closure look we realized that the path we were using is actually a water stream which starts from this gateway and generally is full of water during rains. This is the reason it was smothered with tonnes small boulders. And we were disguised that these are remainder of some of ancient pathway. 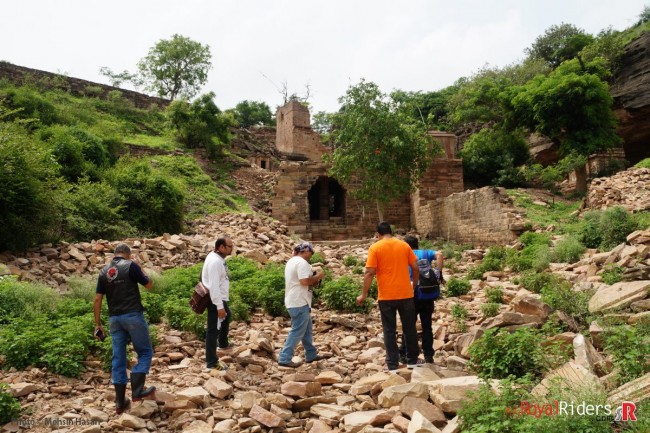 Visiting the Naresar temple from the ravine. 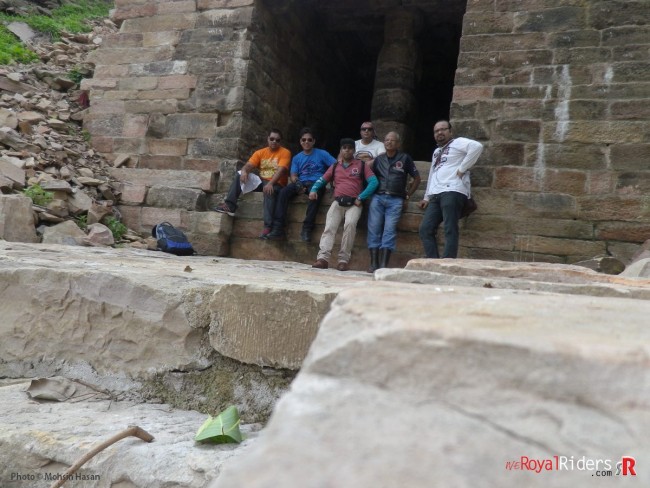 The water stream gateway at Naresar Temple which we misjudged as entrance of the temple.

So finally we were at temple, after having a brief rest, were accompanied by some employees of ASI (Archaeological Survey of India) apparently on duty. It was quite surprise to find someone here as well as was relief that such as nice place is not completely ignored by Government. From the right side of this water gate, we went upstairs and actually entered started to see various shrines. At first glance you will find ruins of temple which stands tall reminding us of Golden era when water used to flow in marvelous way throughout these shrines as they are built to utilize natural water flowing from hilltop towards the bottom to beatify this place. 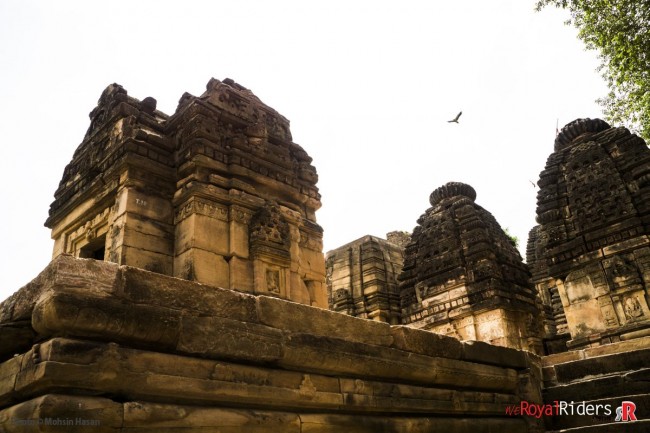 This is the first glimpse of shrines you see if you enter from water gate side.

Although its Monsoon season but the day we visited, the sun was not very friendly and humidity was almost unbearable. Everyone one of us was almost exhausted due to rapid dehydration. It is not advised to visit this place during summer as well as during humid seasons and when you visit then make sure you have good cache of drinking water with you. Hot weather was taking its toll but still this place was marvelous.

As you enter from this pathway, you will see various shrines of which nine pertain to the Gopadri sub-style of the early 8th century. While one of these has an exceptional plan with a Valabhi sikhara, the remaining eight shrines uniformly consist of square sanctum preceded by a short kapili projection which accommodates a doorway of three to four ornate sakshas. The sikhara is three storeyed and crowned by a large amalasaraka and is adorned by a gabled sukanasa front with a gavaksha dormer, harbouring an image of Lakulisa on Siva temples and Durga on the Sakta temples. The doorway has four sakhas carved with scrolls, serpent, pilaster, and beveled band of scrolls with river-goddess panels at the base and a garuda figure holding tail-ends of the serpents on the lalata. The Siva temples usually harbour bold relief’s of Ganesa, Karttikeya, and Uma engaged in penance on the bhadras. The Valabhi temple, dedicated to Durga, is a small triratha shrine with a rectangular sanctum and a superstructure of mixed type with a Valabhi sikhara over a single storey Nagara base. 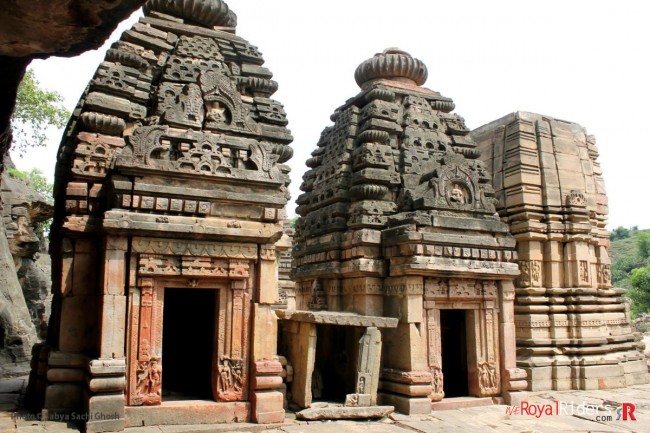 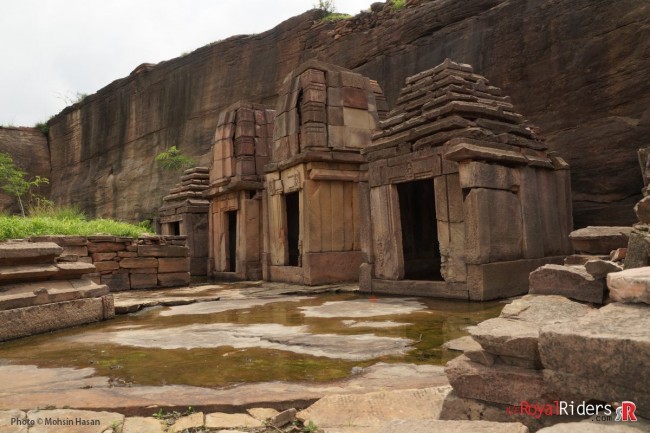 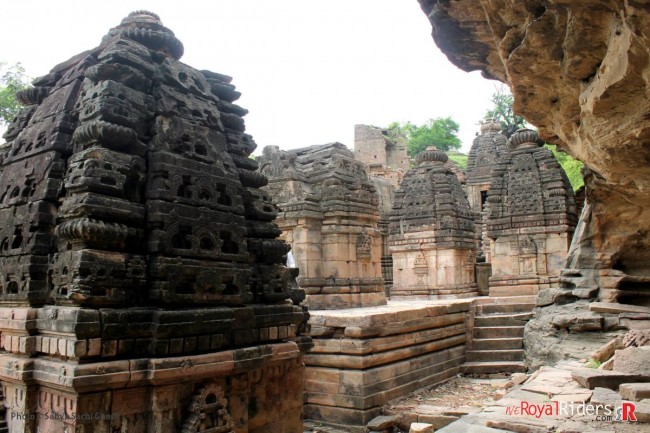 The temples are built on various levels, the water stream bed from where we started could be considered as lower level an then there is first level where you will find group of temples. As you move towards top through water ways and stairs, you will then be greeted with small water reservoir which appears to be the main reason to build temples are around. Walking around and taking pictures we realized that it could be this place here where water accumulates from vast hilltops and was chosen to make temple to use its water to make small beautiful streams flowing throughout the temples. We can call it the second level and above that you are on top of the hill. 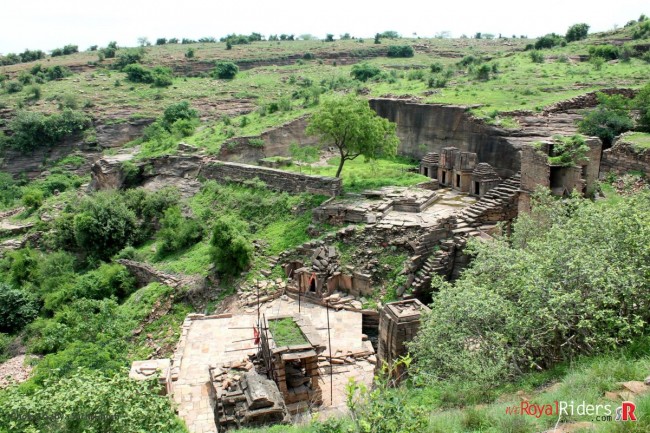 A snap taken from top of the hill showing Naresar temple. 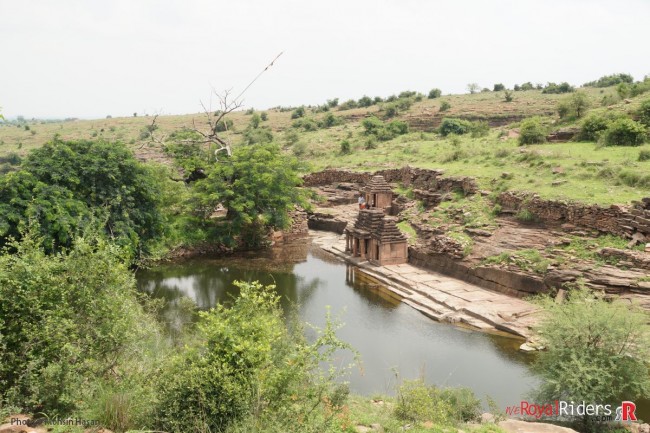 The central water reservoir in temple 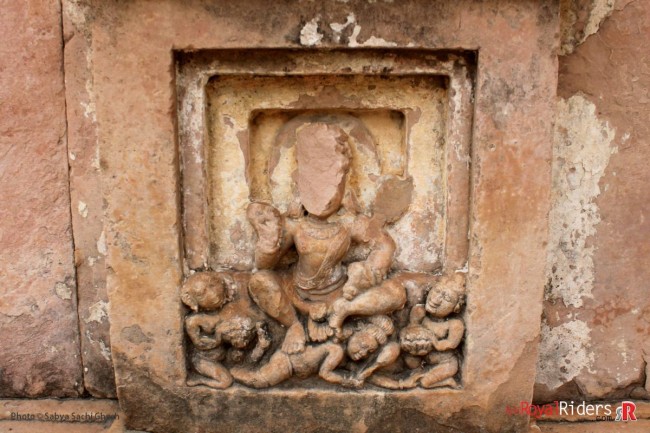 Some of sculptures at Naresar Temples

Finally the visit to this remote and comparatively untouched archaeological site was concluded. However by this time everybody was physically exhausted and Saby was first to leave, navigating back again through that gruesome path, we were not able to spot him anywhere near but then as we entered village, there he was sitting with villagers with chilled water. Instantly we were surrounded by lots of children and everybody wanted to have click of them.

It was welcome move as we were actually looking for a rest in some convenient place, villagers even offered for tea but we denied as it was already very hot. Eventually we found our self energized again after this brief rest headed back to our homes with some memorable moments and memories. 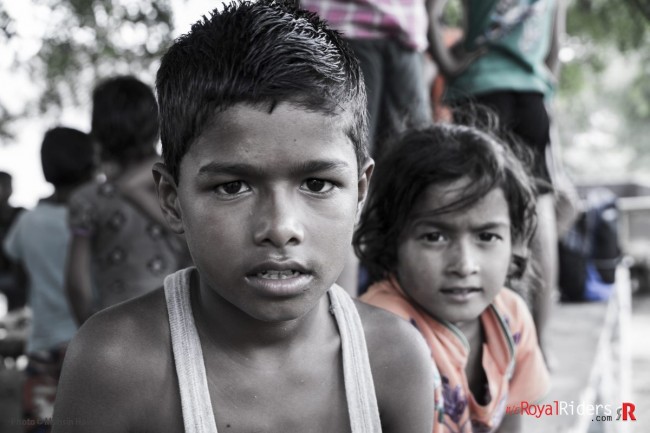 Two kids from Nareshwar Village. Probably they were staring at my fingers as shot them in manual mode.
Photo by : Mohsin Hasan

Over all it was a wonderful experience, if you are living nearby Gwalior or Murena then easily it could be a nice destination to visit. If you have whole day then you can visit more attraction upclose like Mitawali, Padawali etc. However visiting in summer is not advisable.

Meanwhile if you have any comments, views or suggestion for this post or this ride, you are invited to comment below. You can also connect to our FACEBOOK or GPLUS page. If you ever wish to join us then you are welcome. Use links above to contact us.