On drizzling Sunday of March 01, Riders of weRoyal Riders Club of Agra started for one day Ride to town of Deeg which is in district of Bharatpur, Rajasthan. We decided for March 1st as it was also part of two days annual Deeg Holi Festival promoted by Rajasthan tourism. 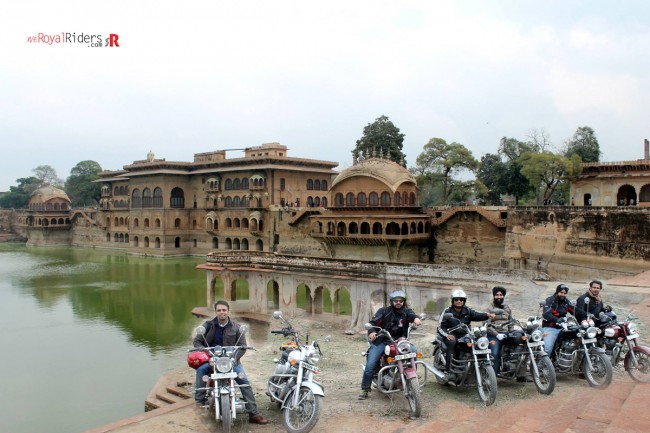 Two snaps combined in one, one was taken Deeg Palace and other was at Deeg fort.

We started early and took Alwar-Bharatpur road which was roughly a 2 hour journey on our Royal Enfield Motorcycles. Since it was drizzling and was heavy rain last night, roads were wet and slippery. By the time we took our first halt, everyone was half covered in mud which was being sprayed on us from road because of water. Roads are nice though from Agra to Bharatpur on this route, so it was not a trouble at all.

It was all covered in Mud.

Our first halt for breakfast.

The first halt was simple breakfast break at Hotel Om Complex at Bharatpur, its ambiance was acceptable but food was just average, in fact some of the stuff we ordered were so simple that we regretted ordering them. After stay of 40 minutes , we again started towards the Deeg Palace. In around half hour we entered Deeg, as we ride through narrow roads of Deeg, we can clearly notice its historical significance, you will be greeted by old structures and pathways. This is a small town, so you may not see fancy places and stuff and even though it has good tourist importance but you will not notice any either.

After a while we arrived at Deeg Palace, we were at its other gate which is mostly used by locals, there is also another main gate from Singh Pol area. With generous Rs. 5 ticket per person, we entered the palace. It was all colorful, we saw many locals and some tourist there. It was rather little crowded but enjoyable with various folks artist performing small groups scattered all around, thanks to the annual two days Deeg Braj Holi festival organized by Rajasthan Tourism this weekend.

As we entered the Deeg palace, we first encountered the large plush garden created in geometrical pattern with so many fountains around the place.It is said to have around 800 fountains, some inside the parts of building also which is all controlled by series of pipes and control system laid at that time which is a good piece of engineering. There are two tanks on top of the building for the fountains, when completely filled, it takes around 4-5 hours to get empty and again it takes 8-10 days to fill through bullock carts etc. which were used in old times. However. tanks are also capable of accumulating monsoon water from the building for the use with fountains. The fountain system is still functional and operates during annual Braj Holi festival where various colors erupts from each fountain using cloths full of colors though a tedious work for people who maintains it.

A view of small lake at Deeg Place

The Deeg palace have various beautiful structure , biggest one being Gopal Bhawan. Then the Savan Bhado bhavan is also one of the attractio which is situated at lake side of palace , its a water merged building made as summer palace. Historically, Deeg acclaims being the first head quarters of the Jat Kingdom when Maharaja Badan Singh was proclaimed its ruler in 1722. In 1730, Maharaja Suraj Mal erected the strong fortress of Deeg with deep moats filled with water and inhabited with predators to safeguard the palace and keep away the invaders at safer distance. Due to its proximity to Agra and Delhi the Mughal armies often attempted to invade the town which were however, bravely fought by the Jats and turned futile. To avoid the repeated attacks Suraj Mal moved the capital to Bharatpur and Deeg became the second capital of the rulers of Bharatpur. Deeg was even after very famous for its strong forts, architectural palaces, lush gardens and magnificent fountains.

Interestingly,the Jat Ruler Maharaja Suraj Mal in a legendary battle between the Jats and a combined Mughal and Maratha army of 80000, valiantly defeated the invaders. Subsequently in retaliation and for teaching lessons to the Mughals and other invaders the Jat King initiated intruding and invading other territories victoriously for more than eight years. Pertinently he also invaded the Mughals and captured Delhi and plundered the Red Fort too.

Inspired by the architectural expertise of the Mughals, Suraj Mal wanted to design his own palace with similar magnificence. After capturing the Red Fort, it was plundered to the extent that even the marble walls and concrete buildings and sculpted designs were dismantled orderly which were reassembled to construct the ambitious palace in Deeg. You can see Suraj bhavan as an example of the Mughal work he took from Red Fort of the Delhi and assembled at Deeg Palace. 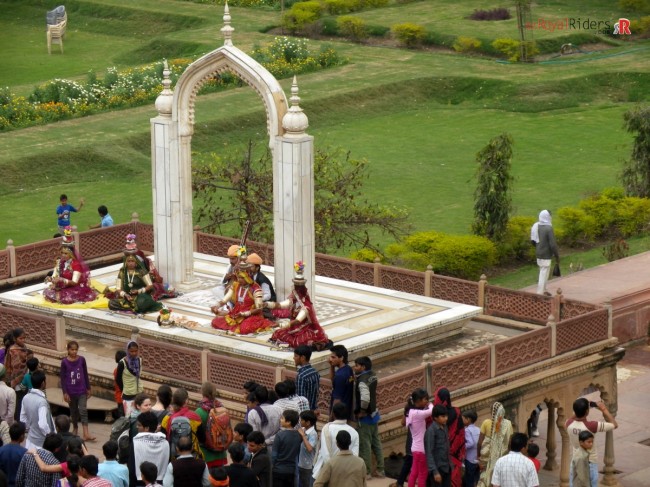 Royal Swing, It is said to be taken from Delhi Red Fort.

After enjoying for while and taking some good snaps for the memories, we moved to Deeg Fort which is rather neglected monument and when we reached there, it was mostly ruins. Inside you find a museum and large open area. When we visited it, some local folks were playing cricket inside the premises. We were directed to a Burj (tower) by them. Passing through narrow stairway, when we reached on top, we found a very heavy cannon lying there, making you feel the glory and power of it at that time. Apart of this cannon, this place gives a very nice view of the town of Deeg as well as Deeg Palace. We had some really good moments of fun there, specially photography by Sabya Sachi Ghosh.. one of our rider. 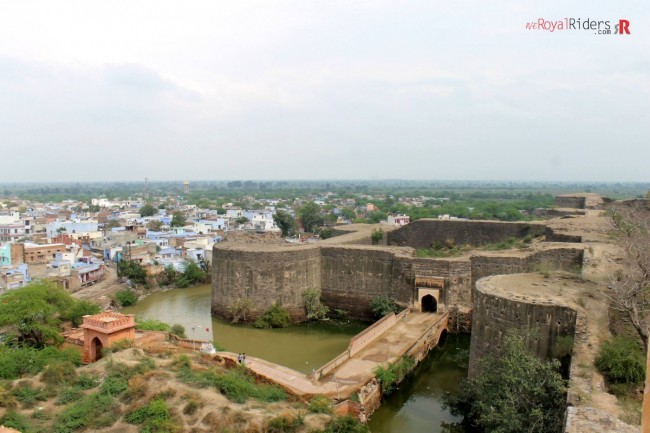 The Deeg Fort of Rajasthan 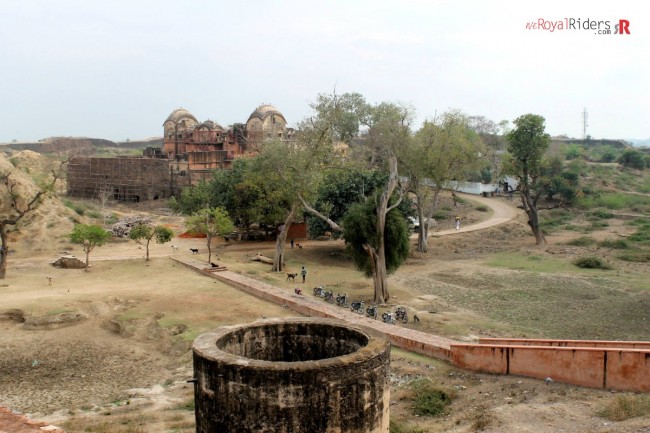 After visit to Deeg fort, it was time for lunch. It was Bheem Dhaba we stopped which is in way to Alwar from Deeg, but before reaching dhaba, one of the Rider Harsha had small breakdown and he got flat tyre, luckly a workshop was nearby. While we were waiting for his bike to we called Mr. Mukesh who approached us at Deeg festival as he too was a Royal Enfield enthusiast. He showed us his newly acquired Royal Enfield 500 std. and also told us that he owns two more Royal Enfields. It was a nice meeting him.

Soon we reached Dhaba, however, incidentally we found another RE lover there. Actually a guy approached towards us and told that his Royal Enfield is not working, at around 50 mtr. distance we saw him trying to start his bike but failing. Being Royal Enfield Riders, we helped him and finally the bike’s ignition was working, thanks to the knowledgeable Riders of our group. 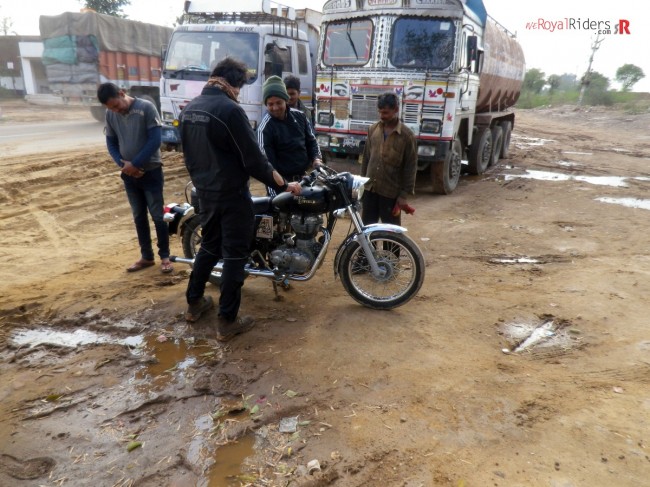 We helped this Random guy with is broken Royal Enfield. Sankalp, one of rider is checking bike after fixing it.

And that’s sum up our recent short one day ride to Deeg Festival Rajasthan. All riders reached safely by dusk. We had few breakdown, my bike got broken cush rubber, but thanks to company of fellow riders, even breakdowns looks like fun. Special thanks for Harshpal Singh, one of our Rider who helped me to get my bike to Home as it completely failed at last few miles.

Again a memorable experience, however if there is any mistake or error in this ride report, do let us know in comment section. If you ever want to join us for future adventures or you have any suggestions for places to visit on Royal Enfield, you are invited. You may contact us various on channel, through our FB page, email or this site.

Thank you for reading.
weRoyal Riders
The Humanitarian Motorcycling Club