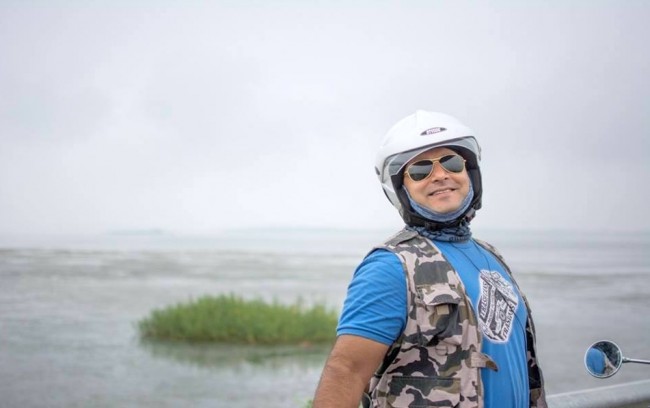 Sabya Sachi Ghosh – a Professional Artist and a Passionate Rider.

A professional painter at heart, Sabya has exhibited at all major art galleries of India and participated in exhibitions in Europe and the U.S.A. He also owns a school at Agra.
He loves riding as much as he loves life. He comes from a family of fishery owners of West Bengal,where owning a Bullet is considered a matter of pride. His father, uncles and cousins all rode Bullet. His first Royal Enfield was a Machismo gifted by his father in 1994. This was the very first bike of this model delivered in West Bengal.

The story behind it is as interesting as his rides on this bike. In grade 11th he got a 100 cc Hero Honda which got stolen, as their engines were often modified for propelling boats in Bangladesh, so his father decided to graduate him to the next level and bought him his first RE, which did not attract much attention of bike stealing gangs.

It was a quaint experience for a 11th grader to be riding a Royal Enfield at that age, which was usually associated with pot bellied mustached middle aged men. But his bike changed this perception completely. He has used both his Machismo and Classic 350 extensively for touring since then.