There are all kinds custom bikes, some wants to look big and massive while few wants to have minimalistic design but its very rare when you have custom bike which sets its own segment. Today we are reviewing Lokhand from Dochaki Designs, a Pune based motorcycle customization firm. Lokhand is a mean machine with solid presence. The name itself says “Iron/Loha”, if you go further its simply means “made from Iron” or “block of iron”. You guessed it right, its not a custom bike you may see every day with such raw attitude and mean looks. 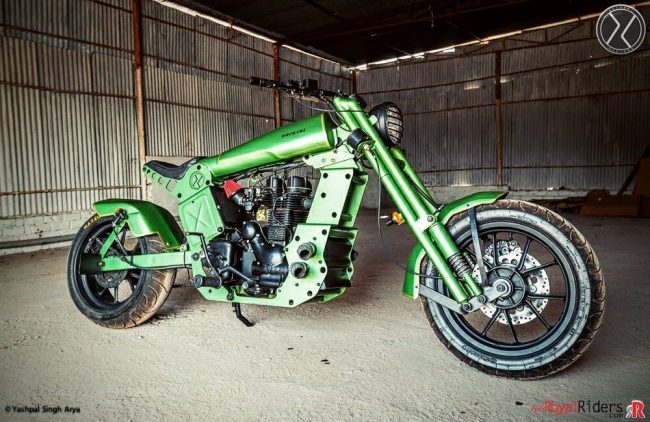 Lokhand with its solid instance.

This bike was built for “India Bike Week Biker Build Off” and you can see the hard work and level of customization involved in this bike. Though they have used 1985 CI engine at the heart of it, but other than that, everything has been made from scratch.

To start with , the chassis is fully custom made and itself is the main body along with fuel tank of the bike. It is made out of metal plates which forms the skeleton as well as the outer flesh of the bike. All the mounting points of the engine were first measured with the vernier caliper to the maximum possible precision. Then that data was provided to the CAD program to cut out plates as per drawing using laser cutting.

These plates were then bended using machines as per the need of design. These two sheets itself act as the panels and chassis. Then the plates are welded with each other using metal tubes, the positioning of the pipes has been in such a way that they provide adequate strength and flexibility to the frame. The tank itself is part of frame which acts as the forth removal member of the frame. 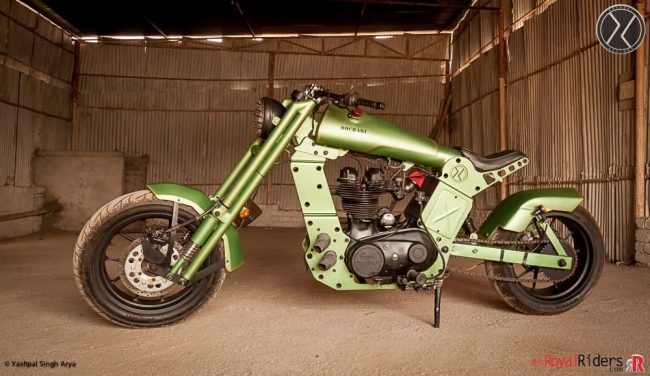 As said, everything is custom made, fronts forks are Inverted Springer mechanism which are racked at an angle of 32 Degree for that elongated instance giving it characteristics of chopper. These forks are also crafted inhouse. Even the front fender goes with the design and has been unconventionally shaped complimenting overall design cues. Great attention has been paid to even little details of the bike, for instance, the maroon tapered patrol cap is inspired from the maroon Barret of the paratroopers of Indian Army which noticeably stands out but sits well with tank.

Another interesting part is the chassis embedded four chamber exhaust system. The exhaust system is one of its kind, the exhaust box is mounted in front of engine and the pipes for exhaust comes out in such a manner from both side of the engine with insulation that rider is not affected by it in any situation. They are bent slightly outer so that all exhaust fumes are thrown away from the bike.

The bike uses massive 17inch 200mm wide rear tires along with monoshock suspension. By now if you have not guessed it already, the overall theme for this bike was inspired from Indian Army. As per Anupam Singh Parihar, the brainchild behind Dochaki Designs, “we wanted to build something which depicts the solid, strong, armored feel of the army. That is why that olive green and gold color is used, further the shape of the tank is inspired from the cockpit of fighter jets. Inspiring the center line which travels on the whole body from front fender to rear to defining the strong support and discipline”.

They have side boxes with X like marking which you generally see in Army vehicles and stuff. Usually these patterns are used to strengthen metal and plates. And as Army have nothing much to do with aesthetics but more with strength, same principle are applied here in this build. The rear is seat is also giving a raw feeling, just to the point, nothing non-sense. 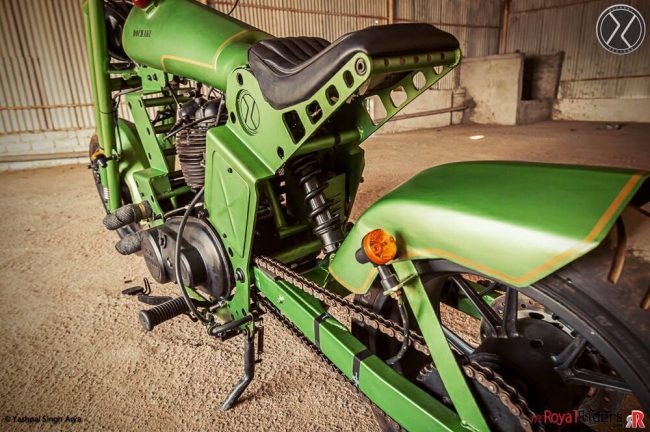 Because of bigger wheels, they had to avoid jack shaft, hence they converted the clutch assembly into a dry clutch and moved the whole sprocket assembly out for the alignment with the rear wheel. Since they have also removed center chamber and everything, now instead of convection RE air filter, they have used radiant free flow air filters which is subtly visible in red under the belly of bike.

The headlight uses a protective metal grill which is a nice sweet touch to the design element. They have deployed a wide grip handlebar , which along with elongated front work classify the bike for a chopper segment. And because bike has raw theme, the instrument cluster is minimalistic with a speedometer mounted on right side of front fork, again nothing fancy. 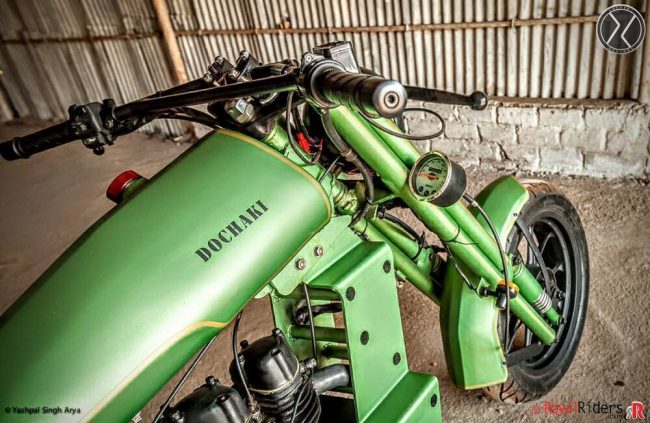 Fuel tank flows with body and is part of Chassis in this modified Royal Enfield Bike.

Overall, its not a design everyone may find suitable for their taste, its more like “love it or hate it”. Technically its a sound work from a talented customizer in India, and the truth is that this is the bike which brought our attention to Dochacki Desigins. Hopefully in future we will see even more creative work from them.

If you have any suggestion, query or comment related to this story then please feel to contact us on our email address “info [ at ] weroyalriders.com” , you may also use comment box below. And to contact the builder, please see the details:

Full profile of bike from above.

All custom chassis with precise measurements.