Nissan Corporation, Japanese automaker who is struggling to enhance it’s portfolio in the Indian market is showing strong presence in other market in the rest of the world. As per the news, company is all set to introduce a new variant of it’s existing Nissan Evalia MPV in electric segment. The name for this electric car is dubbed as Nissan Evalia Electric e-NV200 and is expected to make its debut in the upcoming year 2014. 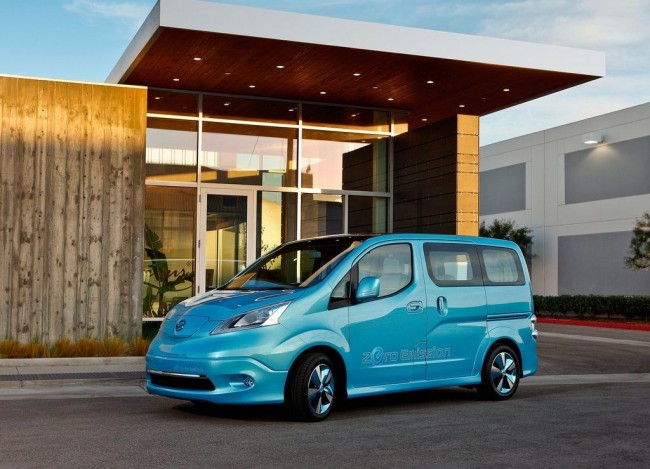 Currently it is under going real life testing with DHL. Nissan will lend DHL an e-NV200 for a period of three weeks. The electric van will be used by the courier company for delivering packages around the Marunouchi District of Chiyoda-ku, Tokyo. At the end of the test, Nissan and DHL will evaluate the vehicle’s potential and practicality after which Nissan will go about doing the necessary modifications to improve this MPV.

Coming to the electric version of Nissan e-NV200, the MPV will produce peppy acceleration, it will come with a CVT automatic gearbox. The electricity powered Nissan e-NV200 is expected to feature a synchronous AC electric motor that will generate a power of 107 Bhp with peak torque rated at 280 Nm. This motor will be juiced up by means of a 48 module lithium ion battery stack. The MPV is also expected to be easy to drive around the city thus reducing the stress of cab drivers. Known for its versatility, the spacious Nissan e-NV200 will continue to be offered with the sliding doors that make ingress and egress easier.

Comparing it with the Nissan NV 200 which was was launched earlier this year, and called as the Evalia MPV. In terms of power specifications and features, Nissan Evalia MPV is equipped with 1.5 Liter turbo diesel engine, the Nissan Evalia MPV is priced and positioned between the likes of best selling MPVs like the Maruti Suzuki Ertiga and the Toyota Innova. The turbo diesel engine, which is mated to a five speed manual gearbox drives the front wheels of the MPV and produces a peak power of 85 Bhp with a peak torque of 200 Nm. The India-spec Evalia features 7 seats and comes with safety features like ABS and Airbags on the top end models.

If we compare the regular NV200 with the e-NV200, the e-NV200 sports a heavily modified front fascia, which includes bluish front and rear lighting units, and a Leaf-type charge-port cover instead of an upper grille. However, it is also rumored that the interiors are also undergone some changes to make it more premium.

The information regarding it’s pricing was remain discloses.