Royal Enfield is seeing unprecedented growth not only in Indian Market but also overseas. However, still they have rather limited portfolio and we see Royal Enfield owners always wishing for more from the company, in past there have been news about 400cc and 600 cc Royal Enfield testing but was never confirmed. However, in February this years company had applied for trademark of name “Himalayan” which is now further confirmed by a spy photo of new Royal Enfield motorcycle being tested at Gumidipoondi in Chennai.

Visually the bike appears to be a adventure tourer from its design aspect, specially the gap at rear suspension. Bike has casual royal enfield headlamp similar to the one we can find in Thunderbird series. It comes with a relatively large fuel tank, obviously targeted at long riding. 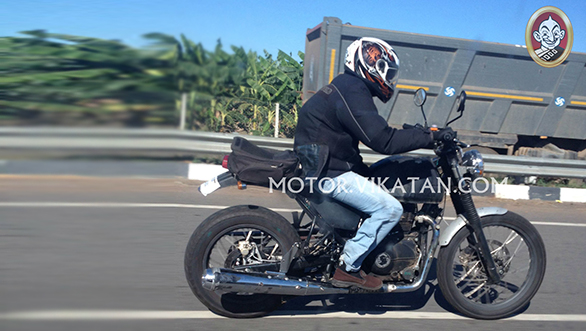 This bike seems to incorporate drastic changes as compared to previous bikes by RE. You can see a very wide rear wheel as well as we have larger disc breaks now. Rear cowl is minimalistic, either its inline for the new design you see in modern bike or it has space for accessories, saddle bag etc. to be mounted there.

As per reports, the bike is supposed to be powered by new 410cc engine, though we can’t make out much from the spied picture whether they are using current UCE engine with higher bore or its a new one. Power delivery is not yet disclosed but should be combination of fuel efficient and more powerful engine than current generation of Royal Enfields.