Right from the early days of formation of our Motorcycling Club, along with regular big rides and small rides, we also used to go for occasional breakfast ride where we gears up early in the morning for a nearby destination and have breakfast with rising sun and usually returns before dinner but now kind of not so frequent because of busy ride schedule. Yesterday, we decided for a small ride though some of our Riders are on Great Ride to Rann of Kutch as some of our guest from Royal Enfield ie. Mr. Rishu and Mr. Praveen were going to visit us.

It was decided for Mehtab Bagh as the guests wanted to capture some moments of rising sun at backdrop of Tajmahal. Soon we joined them at decided time and enjoyed the morning at Mehtab Bagh.

Mehtab Bagh was built along TajMahal between 1631 to 1635, so it took 4 years to make this Royal Garden. Its in symmetry with Tajmahal and definitely it was part of main architectural design of it. Apparently it was built to have a scenic view from Tajmahal to the other side of River. It was very magnificent example of systematic garden for the people of this region. It was well planned with fountains, water streams and central pond. There were many more things like baradari at each side of water stream etc., now all that is destroyed with course of time.

Around 1652, the Garden was submerged in with flood from River and it was neglected and forgotten by people. However, later it was revamped by Archaeological Survey of India (ASI) and they dug out most of its ruins.

Now, its a peaceful place with plush greenery and nearest place to Tajmahal where you can reach with your own vehicle. Its a good spot to see the beauty of the Taj on moon light and this is the reason it is called Mehtab Bhagh where mehtab means chandni or moonlight. No wonder we choose it have some nice snaps of Tajmahal.

Some of the Snaps taken of Tajmahal

A most common technique of taking picture of flowers with subject in backdrop.

A mesmerizing view of Tajmahal from Mehtab Bagh 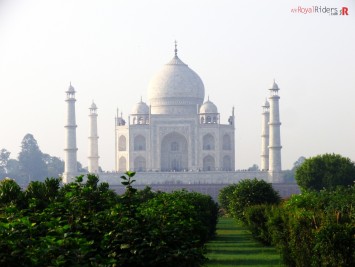 A wide angle view of Tajmahal from Mehtab Bagh. 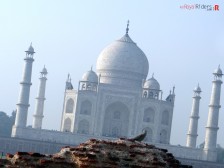 Tajmahal and the bird. 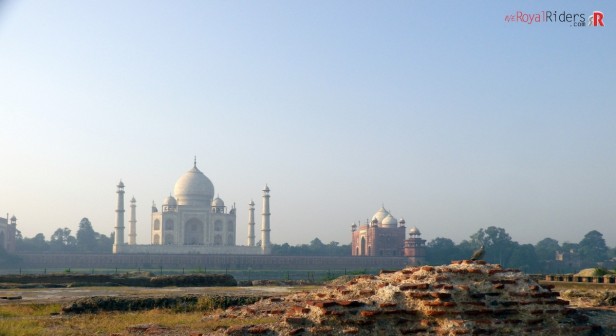 Beautiful picture of Tajmahal from a distance, the pigeon was there just at time.

Since, Mehtab Bagh is situated in other side of Agra, everyone took a short ride, for me it was around 15kms from my place, we all met at decided place and enjoyed then riding together towards Mehtab bagh in scarce morning traffic. we had good time at Mehtab Bagh, mostly we were trying to get some memorable snaps. Had good conversation with guys from Royal Enfield. They were friendly and it appears they also liked our company. 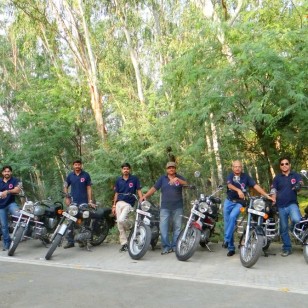 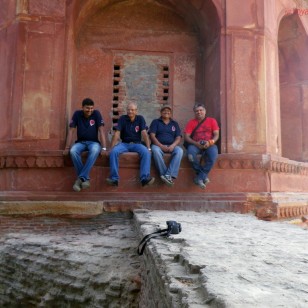 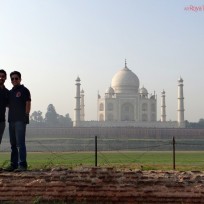 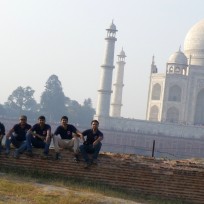 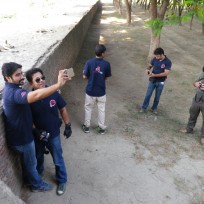 Amit and Digvijay taking a selfie while other are busy in their stuff. 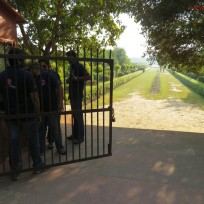 Time to leave Mehtab Bagh, some of the riders picking up their helmets. 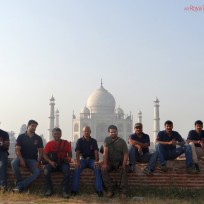 Mr. Pravin and Mr. Rishu with weRoyal Riders Agra as our guest for the morning. 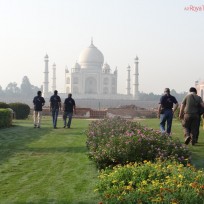 weRoyal Riders at Morning on Tajmahal’s rear side ie. the Mehtab Bagh.

After spending a good time at this Royal Garden, we decided to have traditional Agra style breakfast which was going to be Bedai, Jalebi with Aloo sabzi. Point to be noted here that Bedai ( बेड़ई ) is exclusive to Agra (U.P.) and its something between Kachaudi and Poori. We rode to Dauji Sweet a famous and reputable sweets-chain in Agra nearby on way to ExpressWay as guest were suppose to leave to Delhi from it. 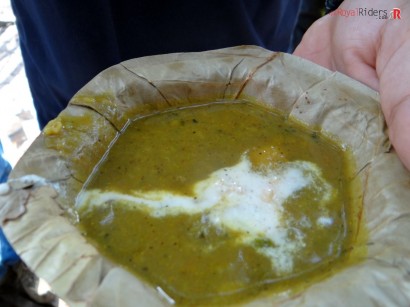 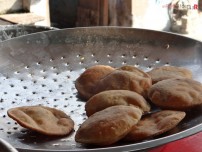 Bedai in Agra is something between Kachauri and Poori. In morning, you can find it everywhere in Agra.

After this breakfast, which may not looks healthy to some including me, but its kind of acceptable to have it occasionally, we said good bye to our guest. They were generous to give us small gift in form of Leather Covered Diaries from Royal Enfield. Definitely we loved it. Looking forward to have similar activities in future.

Thanks for reading.
we Royal Riders – The Humanitarian Motorcycling Club of Agra