Today we have story about an admirable custom Royal Enfield job again conceptualized and then converted into a real bike by a Royal Enfield enthusiast, he is not a modder or customizer but he is proud of his possession ie. this bike. He has named his bike as “Rudra” and there is a story about it, we will come to that later. 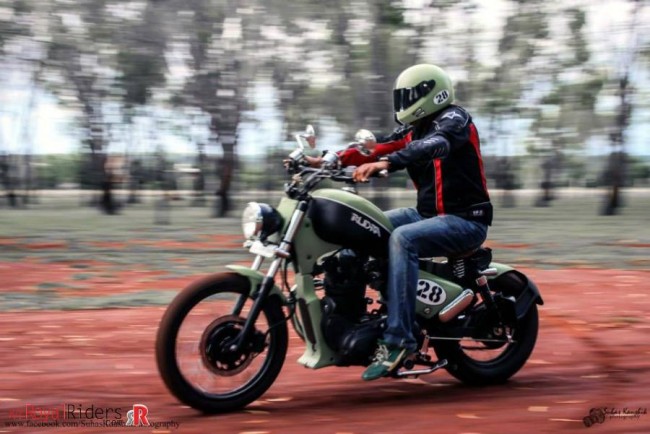 Amit Zipping through on his Beloved Rudra .

Here I emphasized on “again” because in past we already have one custom RE covered as Rudra by Arhunki of Shillong. This is sheer coincident that two random people from two corners of India decided for Custom RE job on their own and named it Rudra. However, by no means we are comparing these two works and now will continue with current bike ie. by Amit Rao of Bangalore.

There are many kind of customization we see with Royal Enfield, some are really complicated, with high level of details and need really professional touch to get them done right (eg. Flying Angel) and some simple yet effective. But in the end of the day, possessing a customized machine is always matter of proud for its owner.

The “Rudra by Amit Rao” is no exception, it is a clean, attractive and adept customization in which he has given bike his own identity with keeping things simple. However, good amount of effort and work has been involved to bring it to life. 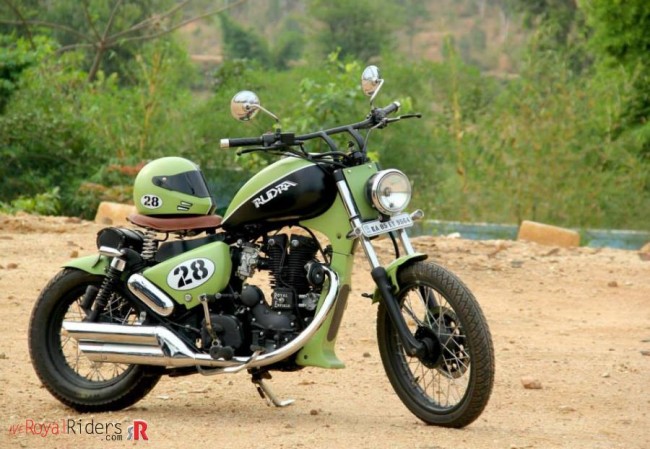 In his words, when we asked about the reason behind name Rudra for the bike, he answered, “The bike has been named “RUDRA”, when you ride it slow it has a calm/soothing sound, but when you throttle it, speeding up it Roars. I have tried to personify as if Shiva is calm when he is meditating and when he is agitated he roars”.

He adds up that, “real inspiration came from a TV program on NDTV, he was watching a talk show where a few panelists were discussing about the Higgs Boson – the “God Particle”. While listening to this the thought struck me, “Rudra” – the one who roars. Hence I named the bike as “RUDRA” – the one who roars.

In the yogic lore it is said that Shiva is the adi yogi – the first yogi, hence most of the meditators lean towards teachings of Shiva when it comes to meditation. Shiva, also known as “RUDRA”.

Shiva’s Nandi is a bull, and people call their Bullets a bull.  The best breed of a bull is characterized by the kind of hump it has, hence the Tank of the bike has been modified to a 21 liter tank, which is huge for its class, which gives it a look of a bull’s hump”.

So that goes reason for name, he also goes on explaining how decided to do it by himself and what problem he faced during the process of building it. 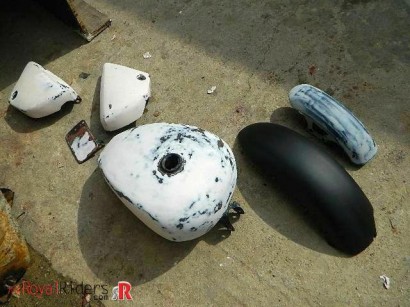 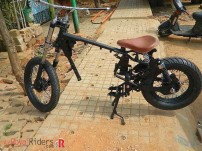 Royal Enfield Chassis and Wheels only 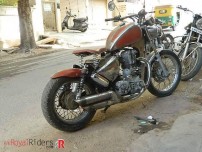 The bike he used as donor bike was a Royal Enfield Thunderbird 2005 AVL he purchased solely for the purpose of rebuilding it. He continues, “I was also fascinated by the old school bobbers, hence I came up with this design. I call it a semi-bobber because unlike a bobber, I have also added few things which you won’t see otherwise in a bobber.”

He said that before starting the customization, “I contacted various well known customizers for details of the process and customizations, costs etc. I came to the conclusion that it would not be feasible for me being in Bangalore and getting the works done in Jaipur, Pune, or Delhi as I wanted to live through the process rather than just giving the specifics and asking someone to build a bike for me. I wanted my bike to be an extension of me – show casing the philosophy that I believe in. The cost also was a factor somewhere.

I got in touch with some famous customizer around my region also and contacted them, one of them asked me to deposit Rs 10,000 in their account just for an appointment to discuss about the customization, which really pissed me off. The other gave me a quote of around Rs. 75,000 without meddling with the tyres/rims and using fibers/plastics for side shields etc. During my R&D I also came to know that these so called “professionals” would get the jobs done elsewhere and just assemble the bikes in their garage and put stickers of their name as if they have done the customization.” 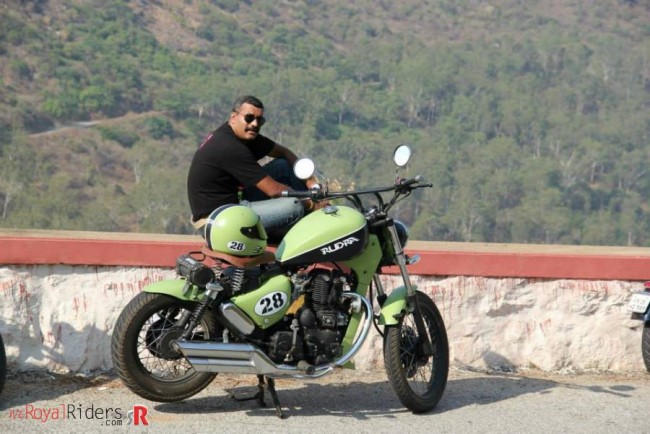 Further he adds, “the building process was a great learning curve, it taught me the real virtues of being patient. It took me three months to complete the whole process. There were few issues like choosing wrong guy for the work, which resulted in time and money loss. Later I went to Imran and Bros at RT Nagar, Bangalore and it proved a great Saviour for my project.

I had the whole bike built at SS Dream Modify at RT Nagar, Bangalore, which is 100% handmade (no state of the art tools) and all metal. I only had to convince him that I needed a particular shape of the tank of around 21 liters which he was a bit hesitant about the looks at first, but due to my perseverance gave in and the tank came out real well”. 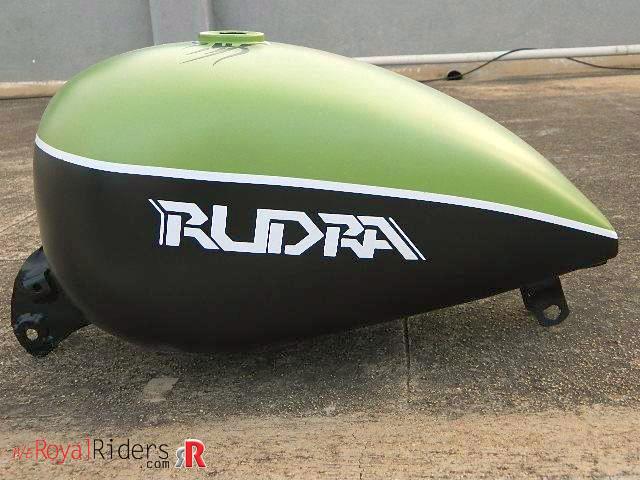 On the question about promising features his bike, he said “the highlight of the bike its 21 liter tank and the silencers. The double silencers was designed keeping in mind the name “RUDRA” – the roarer.

Just to get the inclination right I changed the swingarm and the rear wheel to 15” instead of 19” and in the front kept the wheel 19”. This gives me the “three steps” looks of the bike – tank – seat and then the rear tyres.

I also liked the way they made a plate below the seat to hide the wirings which I think came out well. Instead of opting for readymade headlights, I went for a customized cup for the lights.

There is a story behind the Number 28 on the side shield. I was the youngest in my family to construct the house, I did it when I was 28 years old. Coincidently the loan for the house was sanctioned on the 28th and when they allotted the address for the house, it too came as 28. My son was born on 28th November, and I got married on February 14th, so February second month of the year multiplied by 14, that is 2 x 14 = 28. So number 28 was my choice of number.

I did not want to meddle with the engines and wanted it to look different than what a TB looks, and yet wanted to keep it simple and very importantly functional. I did not want to go overboard with too many lights, or fog lights etc., hence opted for keeping it simple yet attractive.” 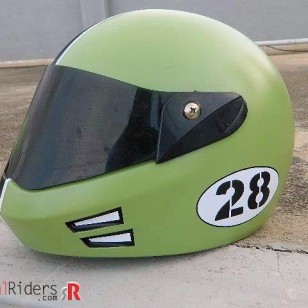 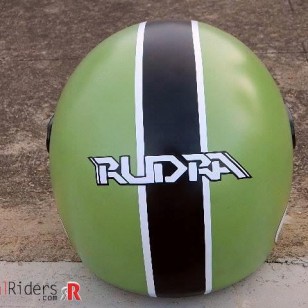 The helmet on same line of design with bike.

He also mentioned that in this process to customize his bike further, he surprisingly came to know that this was the same place where other “professional custom designers” would get their works done, he came to know about it when he was shown album in which there were pictures of various famous custom bikes done in past.

With his bike Rudra, Amit Rao is now a pure Royal Enfield enthusiast, you can find him on facebook.