Honda, one of the leading mammoth among the list of four wheelers manufacturer’s worldwide has unveiled it’s latest edition in the low cost MPV segment for the Indonesia market. This latest edition is named as Honda Brio LMPV which will be seen running on the road of Indonesia in just few upcoming months. However, information regarding it’s launch and availability for the Indian markets is not known but should be available in India soon after launch in Indonesia. 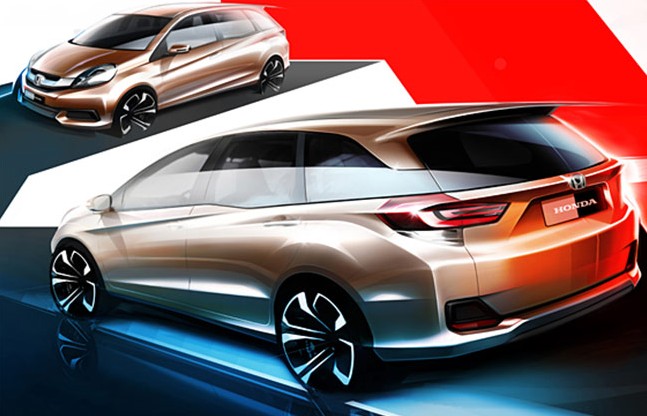 Company has revealed an official sketch of this Brio based MPV named as Honda LMPV Concept at the Mid Year Media Gathering event held by PT Honda Prospect Motor(HPM) in Jakarta, Indonesia. And as per the official information the rolled out for sell of this hatchack will commence from 19 September 2013. The Brio-based compact MPV is specifically developed for the Asian auto markets, including India, Indonesia and others. This new Honda Brio based LMPV will be Honda’s first product in the fast growing compact MPV segment, which will compete against the likes of Maruti Suzuki Ertiga, Chevrolet Enjoy and others in the Indian car market.

From the sources, we also came to know that Honda would opt for a three-row / seven-seater configuration for the MPV and the dimensions of the MPV would be similar to those of the Ertiga. As per the reports from the Industry experts, this new Honda Brio based LMPV will be configured with the similar features in terms of space, comfort, interiors and performance to other cars in the segment. Rumors also suggest that Honda Brio MPV is expected to come in diesel and petrol options. The diesel variant will be fitted with a turbocharged 1.5 litre diesel engine, which is powered by the highly successful Earth Dreams technology(EDT). On the other hand, the petrol model of the Honda Brio MPV will be equipped with a 1.2 litre i-VTEC engine that is capable of generating an approximate output of 88 bhp at 6000 rpm along with a torque of 109 Nm at 4600 rpm.

Meanwhile, Jonfis Fandy, Marketing and After Sales Service Director PT HPM said, “Consumers in Indonesia had the honor to be the first time the world saw live performances Honda LMPV Concept at Indonesia International Motor Show starting on 19 September 2013. We believe this model will be a new option that can compete with models in its class. ”

The price will be unveil at the time of launch. As far the pricing and availability of Indian road are concerned, we can expect the Honda Brio MPV to be showcased at the 2014 Delhi Auto Expo with the launch happening later that year. This will definitely be a straight challenger to Maruti’s Ertiga.

Please share your guess about its expected price tag and how will be give a tough fight against the other similar competitors. Share your view with us.