Mercedes Benz, a multinational division of the German manufacturer Daimler AG, the brand which is highly popular among the luxury car segment has announced officially to launch two new MFA platform based affordable luxury cars in the Indian market. The name of these two new card will be dubbed as GLA crossover and CLA sedan . Mercedez Benz provides a wide variety of luxury products ranging from automobiles, buses, coaches, and trucks is headquartered in Stuttgart, Baden-Württemberg, Germany.

The compact-luxury-crossover segment is heating up worldwide, and some of the other competitors in luxury car segment will soon offer new entries to upgrade their portfolio worldwide. They include upcoming BMW X1 which will be going for sell very soon, and Audi announced at this year’s Detroit auto show that it will bring its Q3 to America, too. Currently, there are two MFA based affordable luxury cars sold in India. Both of these MFA based platform cars willbe launched in petrol and diesel engine options, ideal for the Indian market. Next year, these cars will be joined in India by two more cars based on the MFA platform which are already selling and familiar to us as A class and B class models.

As per the official reports, we came to know that the first to be launch in India will be the CLA sedan , and this car will sit under the C class, as Mercedes Benz’s least priced sedan model. The CLA will be priced under 30 lakh rupees, at a price that will give Audi India something to think about as Audi plans to launch the A3 sedan in India next year. The GLA crossover will be a more pricier car than the model and is largely based on the A class hatchback. Under the hood, both the CLA and the GLA car models will share parts with the A class and B class models and this sharing will include engines. Even transmissions will be shared. While the CLA will get front wheel drive as standard, the GLA will get an all wheel drive mode on the top end models.

According to Mercedes Benz India MD Eberhard Kern, the MFA (modular front architecture) based cars are what will bring in the big numbers for the German luxury marque. Mr Kern is betting on the MFA based cars selling 2 out of every 5 Mercedes Benzs sold in India. 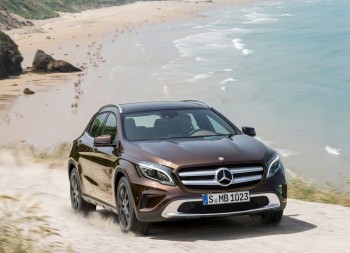 It is assumed that just like the A-class, the GLA will offer a range of turbocharged four-cylinder gas and diesel powerplants. Look for the GLA’s gas offerings to displace up to 2.0 liters, with Benz’s 1.8 and 2.1-liter diesels rounding out the powertrain lineup.

Just at time time of launch both of these cars will face straight competition from Audi Q3, BMW X1, Mini Countryman. The expected price and their arrival was undisclosed but as per our assumptions the GLA crossover and the CLA sedan is expected to go on sale next year.