Counted among the top leading 4×4 vehicle manufacturer, Toyota Motors, a Japanese multinational automaker headquartered in Toyota, Aichi, Japan has announced to introduce the facelifted version of it’s already rolling on road machine, “Toyota land Cruiser Prado” worldwide. Toyota Land Cruiser Prado 150-series was first launched in 2009 and from it’s launch it manages to become one of the most popular among the others 4 x 4 vehicles available in luxury cars segment across the globe.

This new facelifted version of Toyota Land Cruiser Prado 2014 will be debuted with a number of exterior and interior styling revisions, plus safety and technology upgrades. As per it’s official pictures showcased online, one of the biggest noticeable change which can be witnessed clearly is its redesigned front end with new teardrop-style headlight clusters which may be equipped with either halogen or new LED headlamps, the latter incorporating LED daytime running lights, a wider grille with big chrome fangs, and re-worked hood and bumper designs.

Under the hood, the 2014 Landcruiser Prado is expected to motor with petrol and turbo diesel engine options with some worked out improvements to offer high power, torque output and fuel efficiency. However, in India this machine is sold with a 3 liter D-4D turbo diesel engine that outputs 173 PS of peak power and 410 Nm of peak torque. This engine is mated to a 5 speed automatic gearbox, driving all four wheels of the SUV through a full-time all wheel drive layout. While overseas, it is available with 2.7 liter-inline 4 and 4 liter-V6 petrol engines that output 161 Bhp-246 Nm and 271 Bhp-381 Nm respectively. These engines get two transmission options: a 5 speed automatic and a 6 speed manual.

As per the company officials, the new front end increases the length of both the 3-door and 5-door models by 20mm (0.79 inches) to 4,335 mm (170.7-inches) and 4,780 mm (188.2-inches) respectively, without changing the 4×4’s 32 degree off-road approach angle and minimum turning circle. Both the 25 degree departure and 22 degree ramp breakover angles also remain identical to those of the outgoing model. 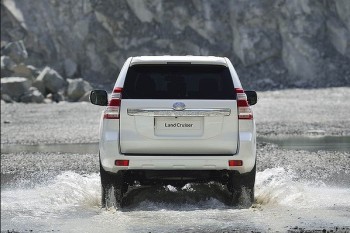 On it’s back, it will come with new tail lamp clusters with clear and red lens and a more prominent license plate garnish. A new selection of 17-inch and 18-inch alloy wheels (the latter also available in steel), along with a four new body colors named Attitude Black Mica, Bronze Mica Metallic, Dark Green Mica and Dark Blue Mica, complete the exterior revisions.

Information regarding it’s price and sales of the updated Land Cruiser Prado will begin later in the fall, with the world premiere to likely take place at the Frankfurt Motor Show in September. However, the current version of the Land Cruiser Prado is priced at 76.22 lakh rupees, ex-showroom Delhi while the Landcruiser LC200 retails for 1.16 crore rupees.

For more details on latest autmobiles, stay tuned with us.