Royal Enfield Motorcycle,  a British company which is now an Indian brand and have presence worldwide who is witnessing increase in its demand. Expanding further Royal Enfield India is now also officially available in  Philippines  also.

With plan to expands its distribution throughout the world, company on Sept 05, 2013 officially announced its launch in Philippines, Cebu. 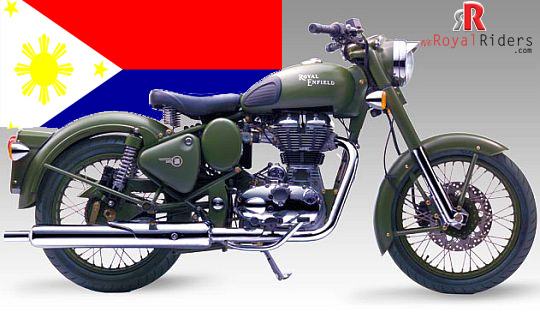 Royal Enfield organizes Odyssey every year, a tough and demanding ride where Enfield owners the world over gather & forge eternal friendships, giving credence to its tagline, “the thump that binds.”.

Royal Enfield is exclusively distributed in the country by Hardcore Brothers Motorcycle Customs, Inc., with Anything Timber, Inc. as its dealer partner in Cebu.

Though already available in Philippines, now RE will be available officially and blending retro charm with modern technologies, the Royal Enfield motorbikes, such as the Continental GT Café Racer 535, the Classic Battle Green/Desert Storm, the Classic 500 and the Classic Chrome are all set to make distinct statements on roads of Philippines too.