Although the dinner meet held on third Saturday of each month is looked forward to impatiently by all members of WeRoyal Riders of Agra, however the July meetup was awaited with bated breath, as “a special surprise” was promised by senior rider Mr. S.P. Singh. 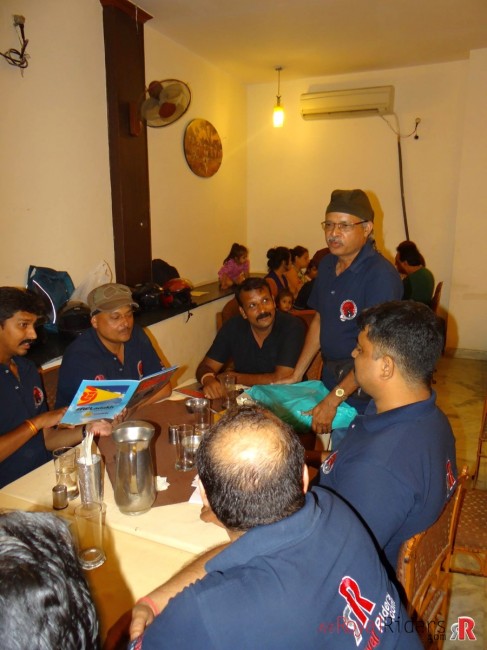 The meeting took place on the 19th July at a centrally located Park Restaurant in Sadar Bazar. The meeting started at 8:30 p.m. The agenda included submission of registration forms of new members and annual membership fee. The club had decided to auction the special edition of BEAT magazine (in which WeRoyal Riders of Agra were featured by Royal Enfield) to collect charity fund. Such funds are allocated to be used for various social causes undertaken by the club from time to time.

After the usual rounds of discussions on future rides, laughter and leg pulling, riders enjoyed a hearty dinner. Park Restaurant would be recommended only if Budget is your priority. Food was average, and the ambiance of the restaurant was dated and uninspiring. However their quick and accurate service more than made up for their other shortcomings.

Finally after dinner, riders were inquisitive about the big surprise that was promised to them. This turned out to be the felicitation of the 5 members Mr. Harish Khandelwal (Hary Khan), Rajesh Chauhan (Captain), Himanshu Bansal (HB), Amit James David (Pathan) and Sabya Sachi Ghosh (Saby) who endeavoured on 3151 kms long “Pride Ride 2014” to Ladakh and the highest motorable road at 18380 feet to Khardungla. The ride was accomplished in 12 days from 12th June 22nd June 2014. 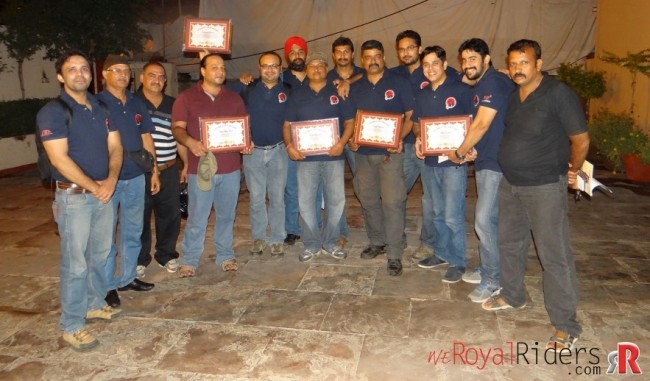 weRoyal Riders enjoying the moments, though some need to work on their belly.

Each member was awarded a specially designed framed certificate for their accomplishment. This was followed by the customary “desert ceremony” which is hosted by the member who is the last to join the meeting, after the stipulated time. Finally the meeting was adjourned after exchanging pleasantries.

The other members who were present in the meeting were Amit Sharma, Mohsin Hasan, Sankalp Chandra, Digvijay Singh, Harsh Singh, BK Arora and Akash Kapoor

Tune in again to keep yourself updated on more activities of WeRoyal Riders.