Riding a motorcycle in the Himalayas is a dream of every motorcyclist worth his salt. However a ride to Leh, the Mecca of motorcycling in the month of June, from the scorching hot plains of India to the freezing high altitude passes of Himalayas is not everybody’s piece of cake. This is why this ride is considered to be the Holy Grail by motorcyclists all over the world.

What started as a high risk adventure by a handful of daring tourists, has today become the annual pilgrimage for adrenaline rush seeking motorcyclists from India and the rest of the world. A ride to the Ladakh region in the state of Jammu & Kashmir is India is perhaps the pinnacle of leisure motorcycling. Due to the diversity of its terrain, this ride leads you from nicely laid tarmac roads, to gravel and mud pathways and very narrow roads full of slush pits and freezing water crossings, into the world’s highest motorable mountain passes. 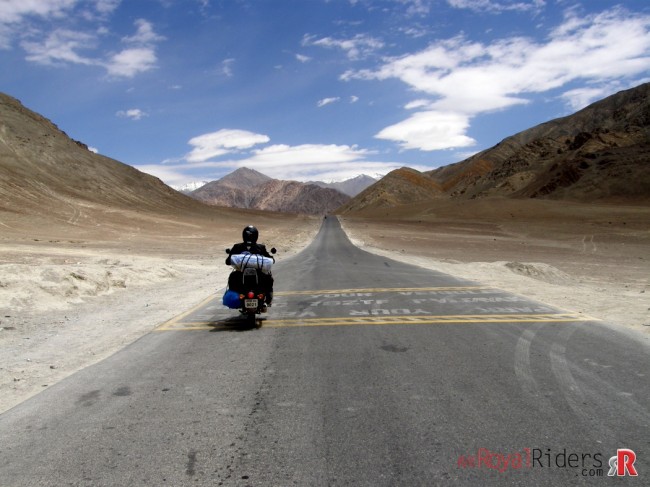 Such is the nature of this ride that the panorama in front of the helmet visor and the condition of the road below can change in the blink of an eye. Hence it is important to maintain high level of concentration at all times.

Leh can be reached via three major routes, through Kashmir valley via Zozila pass, through the Spiti valley via Simla, which is the most scenic route of all, and through Manali via the Rohtang which is the shortest, steepest and the most traditional of the three. Traditionally the choice of motorcycle for this trip has been the Royal Enfield Bullet, which is a simple, high torque motorbike with ample ground clearance. Although today many other brands of motorbikes can be seen on this route.

As this was the first ever ride of weRoyal Riders, Royal Enfield Club of Agra to this region from its official inception in 2010, a lot of pre ride planning and research went into the early phases. Various members contributed information gathered from the Internet, personal interactions and write ups of people who had successfully completed this arduous ride.

A total of 14 days were set aside to complete this ride at an enjoyable pace, which included a couple of extra days for break downs or traffic jams, which was common during the ride. Purpose built riding gear such as jackets, pants, waterproof shoes, luggage system, spares etc were ordered from various sources. Medical history of the participating riders with emergency contact details were put into a file, especially because this ride can affect the healthiest riders with acute mountain sickness.

We decided to take the longest route to Leh via the Kashmir valley, as this route had the most gradual ascend to the Ladakh region.