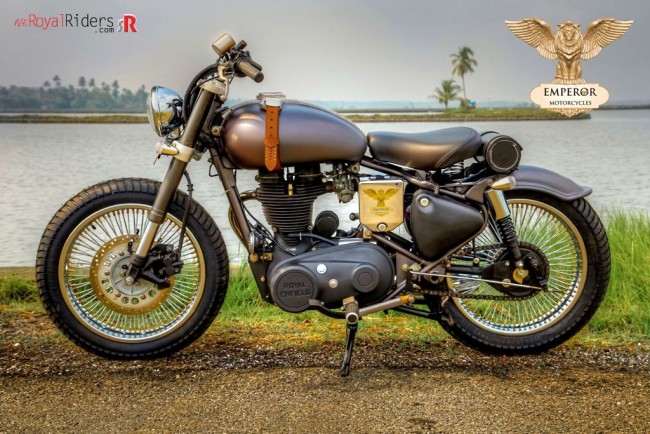 The bike was designed keeping in mind that it should maintain authenticity of Royal Enfield yet should look unique and visually impressive with certain dark tones. Most interesting part is its fuel tank with leader strap mounted speedometer. 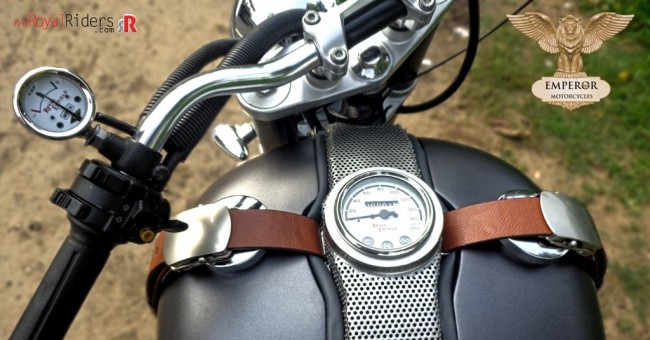 The retro inspired leather strap with speedometer on tank.

As per Bimal, custom bikes are a piece of art and it should be captivating as well admirable. Hence lies the concept of strap around the tank, he says when ride this bike up to a petrol pump, its not just open the fuel cap, fill it, shut it, leave kind of scenario, you have to literally “undress” the bike, loosen the belt, open the cap, fill fuel, shut the cap, buckle her up again. It makes an event out of the otherwise mundane act of filling fuel. Very theatrical to the beholders eye. It should appeal to both gender, that’s art.

The leather strap around the tank and speedometer was inspired from vintage vehicles but it also serves dual purpose of holding the split 3-piece tank fuel tank firm. The tank has been splitted into two major parts and bolted only from two sides on the chassis. Considering the irky condition of our roads and to avoid any fatigue induced crack at the mounting points after a few years of usage, leather straps are used like in good old vintage cars, bike and planes. There is a loop at both sides of the center piece of the tank on which the speedometer is fixed. The belt passes through the loop and wraps around the tank. This snugly holds the tank to the chassis making it an integral part. 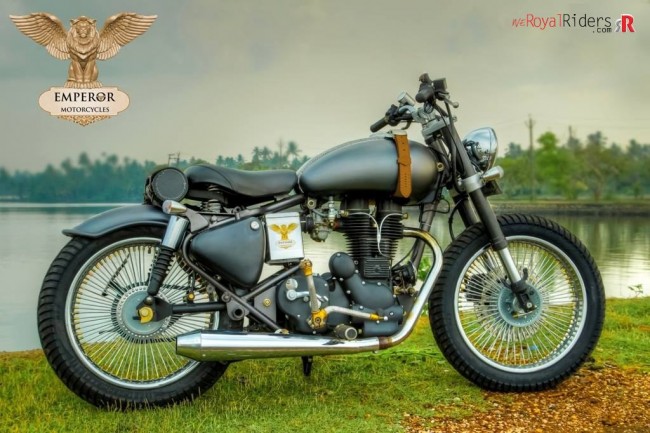 The donor bike was Royal Enfield Bullet 350-4speed. Though there is no preference, new generation UCE engine would have also done well here. However, Bimal likes the old cast iron 500cc engines for its massive cylinder head and cylinder over the cast iron 350 for which says that has good visual presence with its enlarged fins. The UCE engines are massive ones by virtue of its own design. They look absolutely stunning when painted black. It too fills up the engine area neatly.

The tyres are 100/80 x 18 on front and 120/80 x 18 at the rear. Block pattern treaded tyres were chosen to give a rough look those works well for regular riding. The bike as a appealing wider front which uses KTM USD forks. The handlebar is also aptly chosen to compliment it , intelligent usage of small indicator gives even broader visuals at front of the bike. With no fender, the bike affirms the bobber instance significantly.

Further, the perforated steel mesh applied on the gear, kickstart lever and brake pedal was inspired from the heat shield found on rifles and the brass from bullets. All through the design and build process care was taken to maintain the RAW look in a very subtle yet effective manner. The bike had to have that “sophisticated gentleman” feel to it. 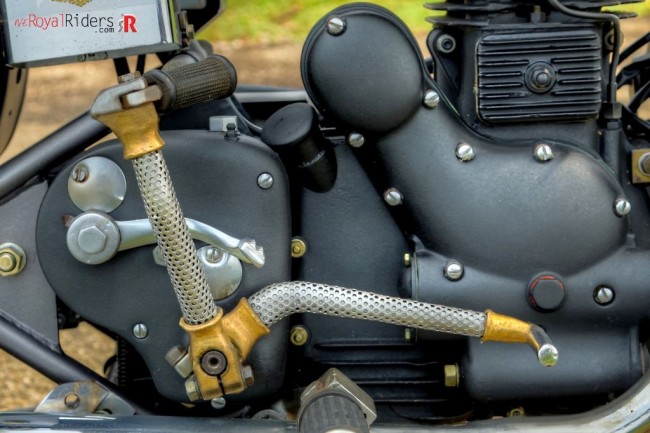 When asked about theory behind the name of bike “Retro-Naut”, he replied that “Naut” part of the name is sort of associated with astronaut , cosmonaut terms. Since this bike was a mix of old world and new world charm, it had to have a name related to that so the word “RETRO” added. It instills a sense of nostalgia in the minds of the viewer. Hence you have the name “Retro-Naut.

We hope he continues to venture into new creations with his polished and improved designing skills to give even interesting custom motorcycles. In case you need to get your bike customized by “Emperor Motors Inc”, you can contact them through details given below.

7 thoughts on “Retro-Naut : A custom Royal Enfield Bobber from Emperor Motorcycles of Ernakulam”